Just when you thought you knew someone, bang, zing, you find out they have an entire secret life.

Rayo and I have biked, swam, and run miles together over the years. I had occasionally heard little references to a beaded necklace or working out a design. Then, one day she shows me a work in progress. Wow. This is not your everyday beads on a string. This is haute cotoure, fine-art embroidered beadwork.

So when Rayo invited me to exhibit my calligraphy/watercolor things with her sophisticated creations at our local gallery, I was nervous but energized. I got busy.

Below are some of the thirty or more original calligraphy artworks you'll see at our exhibit called In the Woods -- a title we chose to reflect the feeling we had in stretching our range as we prepared for the exhibit.

Go to www.flickr.com/photos/rayo_boursier to see some of the fabulous beadwork pieces that Rayo will present at this exhibit as well.


The exhibit opens Friday, September 2 with a reception from 4 to 6, at Drury Gallery at the Portage Center for the Arts. Open hours are  September 2 through October 1, 2011 Wed-Fri 1-6, Sat 10-3.  Admission is always free.

I think the word is "ideal."

I swam the 2.1-mile Point to La Pointe event on Saturday -- from Bayfield to Madeline Island in Lake Superior, where conditions were ideal. A new course record was set (43:24), my friend, Ann Berres-Olivotti, broke her record from the previous year to take first in our age again (49:16 this year), and I finished in 1:08:51 (had expected about 75.) The lake was at her best.

As I hear it, women who give birth remember the wonder and forget the pain. So, yes, I may be skimming a bit and remembering the rosiest. Still I know I was relieved that the temperamental lake was calm and 70-some-degrees. The pink morning sunshine and pebbly, red beach that faced the east were calming. The back of the field of about 150 women swimmers (where I deliberately seeded myself) had plenty of breathing room along the straight route.

I counted buoys along the course, five altogether, and although I couldn't see each until I was almost upon it, I could sight far ahead to the little hump on the island that kept me in line. I allowed myself a couple of peaks at my watch, and despite my purposely easy pace (my iffy arm) things seemed to be moving along well. I didn't wish for another degree of warmth; my black wet suit, the sun shining on shoulders, and the 75-ish air temp made the water perfect for the effort of swimming. And the occasional nosefuls of sweet water were cool going down.

I giggled as I sighted during the last quarter mile because the yellow finish banner didn't seem to get any closer. I was baffled at an unexplainable current during the last 200 meters that held me in place despite efforts. But even this seemed right, I could hear the crowd on the island and see more distinct colors of the flags on the finish arch. I had just a few more minutes of swimming so drank it in.


There may have been tummy butterflies, worries about my still-insecure left arm, and hidden wishes that I was faster. But five hours of driving each way is now just a moment of passing scenery and a friendly chat with my swimming companion. My night-before worries that the weather could turn into one of those "isolated thunderstorms" are evaporated. My near-sighted concerns that I wouldn't be able to see to the finish are disappeared. And I've almost forgotten the fear that my wet suit would be too tight -- I hadn't had it on for six weeks and me and Mr. Scale don't speak anymore.
The many swimmers I met at the beach, and after the race at awards, and on the return ferry, were humble and warm. I think a big lake makes us all feel a bit of humility. 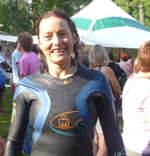 Afterward, I drove from the swim to my family reunion hours away. And, although I had swum two miles in the reunion's pond in 2010, this two-mile Great Lake swim got applause from my sibs. There is something about a big lake that is wondrous. And on Saturday, it offered itself up in an idealic way.

Point to La Pointe is a fundraiser for the Bayfield Rec Center. It has great community support, hot food, over 40 kayaks, sweatshirts, hand-made awards in age groups. At the awards ceremony, the event coordinator told us that this event kept the Rec Center from closing five years ago when the swim started. This year they raised $25,000. Find out more at http://www.bayfieldreccenter.com/Point_to_LaPointe_Swim.html.

lorraine
Left of the Blue Wall A mouse was put into a rectangular room with four white walls. A treat was hidden in a corner as the mouse watched. Then, Ms. Mouse was spun around a few times (I know the feeling) and dropped in. Half of the time, the critter went to the wrong corner searching for the treat. Then researchers painted one of the walls blue and did the same treat-hiding. Did the task of the mouse get easier? Hah, half of the time, the mouse STILL went the wrong direction! Researchers concluded that the mouse couldn't connect the ideas of both "left" and "blue wall." Same thing for us. Not until about age six can humans connect ideas in spatial language and think “left of the blue wall.” So I see that language is not only communication with others, it's communication within our single mind. Words are more than words, they can form our reality.